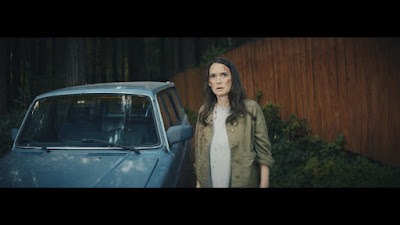 Upon arriving at a remote cabin in the redwoods, Kath and her boyfriend find a mysterious younger couple already there — the rental has apparently been double-booked. With nowhere else to go, they decide to share the cabin with these strangers until the next morning. When her boyfriend disappears with the young woman, Kath becomes obsessed with finding an explanation for their sudden breakup— but the truth is far stranger than she could have imagined.

A twisted moral mystery, Winona Ryder stars in SXSW22 narrative feature THE COW. Continuing Ed teacher Kath is dating one of her students. He is younger and on a different wavelength. Max suggests a surprise weekend away. When they arrive at a remote cabin, there’s another couple already there. After agreeing to share the space for the night, Max disappears with the other young woman; Kath is now left in the lurch. As she seeks closure, it turns out there’s more to the story. Where did Max go? Who is this mysterious woman? Welcome to the unreal journey that is THE COW.

John Gallagher Jr is charming and a fresh foil for a more level-headed Ryder. Brianne Tju plays Greta with a sharp edge that makes you want to punch her. When you watch, you’ll understand that this is a compliment. Owen Teague‘s performance is more nuanced than at first glance. His emo nature has a grounded backstory. Dermot Mulroney brings a rugged charm that is irresistible. His chemistry with Ryder feels pitch-perfect.

Winona Ryder‘s journey feels just right. Blindsided at every turn, she keeps her cool for the most part. The way the script is structured we know more than Kath. This keeps Ryder relatable throughout. I know you’ll agree with me even as the screen goes black. Her final moments are pretty glorious. Fans of Ryder’s work, anything from Beetlejuice to Stranger Things, will love seeing her back on the big screen. We’ll take her wide-eyed wonder in any form.

THE COW is sure to intrigue any audience, thanks to director Eli Horowitz, who co-writes the screenplay with Matthew Derby. A great score from David Baldwin and solid editing back up this phenomenal script. HBO should tap these two for literally any upcoming series pitch. They are a hell of a team. A slow-burn plot holds you with tidbits of information in the form of flashbacks. Twist after twist glues you to your seat and the final 30 minutes had me yelling over and over, “What?!”