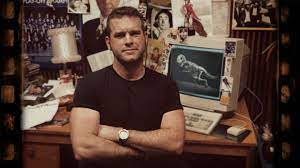 Portrait of Steve 'Spaz' Williams who is one of the forces in computer animation animation. His work on films like the ABYSS, TERMINATOR 2 and JURASSIC PARK changed movies and the world forever.

This is a good but rather by the numbers tale for a guy who never was by the numbers. A man who loved life and loved doing things his own way he chaffed in the studio system and his antics, such as crashing George Lucas' office often made the suits want to fire him, but his abilities kept him out of trouble.

The problem with the film is that much of this is standard issue bio, but focused on Williams. It's only when we get to Williams chaffing at the suits getting credit and awards for the work of his and other animators that the film comes to life. Legendary filmmaker Dennis Muren comes off looking like an ass since its clear the people like Williams were the real geniuses at work (Muren apparently told Williams not to do the T-rex animation that proved computers could do all the effects on JURASSIC PARK.)

While never bad it is is probably going to be best for animation junkies.