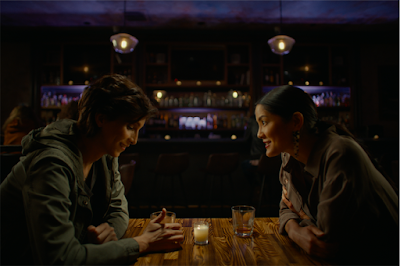 Pooya Mohseni and Lynn Chen are excellent as the former lovers who looking for different things in Mari Walker's thought provoking "two" hander.

Years after  abandoning Naomi and after she transitioned Kris reaches out to her her old girlfriend to try to talk about what happened between them. What follows is a night of more and more intimate discussions.

This is an evening of uneasy travel for everyone as the conversation of the shared past gives way to revelations of real pain. Along the way there is plenty of discussion regarding being trans, being male versus being female, relationships, art, family as well as many other things. Its a heady mix that makes you think while it moves your emotions.

This isn't an easy film. A great deal of this film clearly comes from a real place. There is a sense that some of the conversations aren't made up, but transcriptions of things that happened. You know things are going to be tough from the outset as we see things are awkward to start. Neither of the women has seen each other in years and ty aren't sure how to start. Things get occasionally difficult as long ago events are brought up as a means of trying to find a better connection but they are revealed to be a sore spot. And then things get worse as long buried emotions and secrets come to light. I felt rocked.

Despite running a seemingly brief 75 minutes I came out of SEE YOU THEN feeling as if I'd been with the two women the whole evening. There is a great deal here and to be honest I know I need to go through the film another time or two to catch it all. This is a film that is a full meal.

While I really like the film a great deal and I love the sense that we are watching series of moments in time, I would like to quibble with one thing and that is the film tries a little too hard to get every possible revelation into the film before the end credits. I think my quibbling is not so much with what happens but how it happens  with the final pieces seemingly more  stage managed into happening just then.

Quibble aside SEE YOU THEN will rock you.