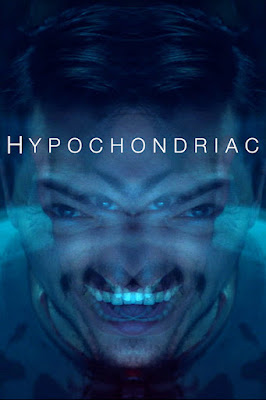 If the Oscars noticed small films like HYPOCHONDRIAC then Zach Villa would probably be in the running for  the Best Actor award.  If the film gets a push it might happen but I  doubt it. I'm mentioning this at the stop because Villa is so good that this should be a breakout role that launches him into the stratosphere

Billed as a horror film it really isn't. This is more a character study with some horror-esque shading. The film follows Villa's character who begins to breakdown mentally and physically in response to what happened when he was a child- his mother tried to kill him during her own breakdown. It’s a chilling ride because for the most part everything is played largely realistic. The horror comes from the small shifts into madness and being unwell. We never go over the top and remain grounded which makes it not only chilling but deeply haunting.

In discussing the film with my friend Liz Whittemore she called the film unique, and she is dead on. I have not really seen a film dealing with mental health quite like this. There is a compassion and understanding that you don’t find in any similar films. We care for the characters. Nothing feels like its there for effect, rather, it feels like it’s suppose to be. Look at all the characters around Villa, everyone is well drawn.  They are people we know. As I said above the film feels grounded.

Watching the film we feel like we are watching a slice of life reenacted rather than a narrative tale that was made up. The result is we are ricked to the core as events play out.

If I have any problems with the film it’s that there is a character  that looks like the rabbit from Donnie Darko. Yes  the suit has a different head but it's inclusion seems a riff on the earlier film and for a film as  one of a kind and special as this one,  it is a glaring misstep that pulled me out of the film for a bit.

That said this HYPOCONDRIAC is a stunning film that will rock your world.