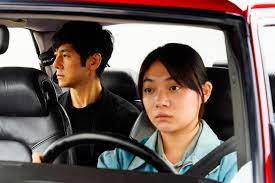 I did not particularly care for the award winning Drive My Car. Don’t get me wrong I really like the films of director Ryusuke Hamaguchi but this was just a tough slog.

I have several issues with the film.

The first is the ponderous pacing. This is a small scale film inflated to twice the size it should be. I suspect that there is some reason that the film is sloggy three hours but I will be hard pressed to know why.

The other problem is the whole thing is so deliberately structured and forcibly literary that that there is no actual life anywhere in it. This is like the Beckett or Chekov plays referenced in the film where every thing has a deep meaning  and things are not so much life but an intellectuals idea of life.  This is the sort of art film that in the 1960’s and 70’s  was lampooned.  There are long monologues where everything is laid out. Everything has a meaning beyond what it is. There are no messy edges just perfect construction. It feels pretentious like the Shakespearean productions where everyone steps forward to annunciate each word and idea. You can feel the director Hamaguchi behind it all telling us what to think and at what point. You can feel, nay, you can see the all of the clock work moving all of the pieces  to where they have to go.  And since its so obvious what its trying to do with all the references you know where its going because it’s been telegraphed from the start.

This might have worked if the film wasn’t shot so as to be real life or if the dialog wasn’t so over ripe with meaning, but that’s not the case and it just is a bore