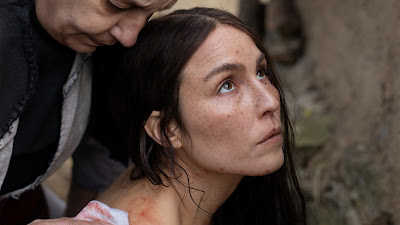 Described as a horror film in some Sundance material YOU WON'T BE ALONE isn't. Its a fairy tale about a a young woman who becomes a shapeshifter who takes on the form of a number of dead people. It ends where it begins.

I liked YOU WON'T BE ALONE but I didn't love it. The film is the story of a someone learning about life and herself by walking in some eles's shoes, literally. I think it is a solid and very good film.  The cast is great with the multiple actors and actresses playing the same role blending together prefectly. Its a beautiful film to look at and has a great pastorl feel.

The problem for me was it was watching it was kind of like having a friend drive me some place I thought I hadn't been to before only to realize about half way in I knew the destination. Realizing what I was seeing altered how I saw the film. It took the wonder off the trip, despite having a blast taking it.

To me this film feels like a melding of Justin McConnell's LIFECHANGER with one of 2021's most haunting films ALL THE MOONS with a dash of La Ronde sprinkled in by way of Malick (TREE OF LIFE), Tarkovsky (ANDREI RUBLEV) ,Sergei Parajanov (SHADOWS OF FORGOTTEN ANCESTORS) and David Lowrey (A GHOST STORY).

Its a film that feels it has been made with the best ingredients, it just didn't knock my socks off.