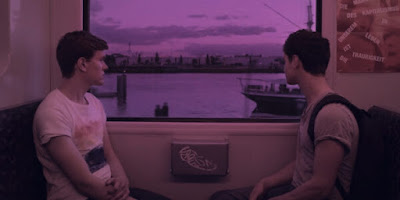 First Time [The Time for All but Sunset (Violet)
Largely wordless film that is mostly a static shot of people sitting on a train during a journey.

This film is a toss up. You are either going to love this film of a train journey or you’re going to wonder why we are seeing this. Personally I’m not sure what the point of all of this is. I say this as someone who watches You Tube Train videos this film didn’t click with me. Perhaps if we didn’t have to look past four non- moving people on a train this might have played better.

A MAN AND A CAMERA
The director wanders around a village shooting whatever he sees. Eventually he goes up to people’s doors, knocks and sees what happen.

I’m not sure what I think of this. This is a  blurring of the line between clever examination and dumb home movie as we look at all sorts of things and before starting to invade the privacy of various people. Toward the end it becomes more interesting as we go inside the homes and conversations happen.

It’s a sketch or an experiment the likes of which you’re going to watch once and never look at again.