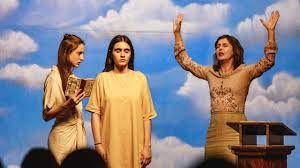 Rachel and her dad move to a new city and set up a grocery shop. They are escaping their old home, where Rachel’s mother died under violent circumstances and her father’s business failed.  As her father works to make a living for them she loses her self into religious fervor. She joins a local church and makes friends with several of the young women attending services. When a trip to a near by lake leaves her seeing signs and desire to rewrite the bible putting women on an equal footing with men things begin to boil.

This is a solid  little thriller that should be on more people’s radar.

One of the hidden gems at SXSW