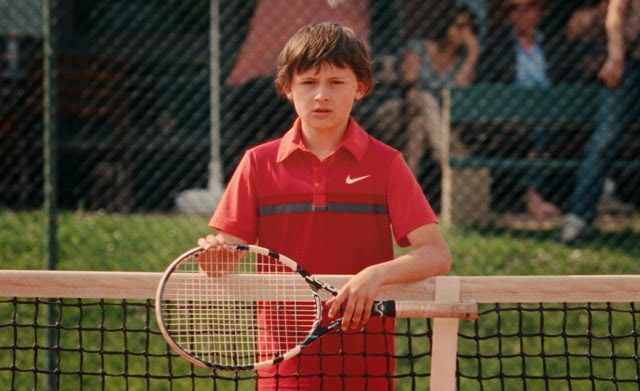 Major misfire film is the result of two barely connected plot lines being forced to come together as well having a real dick for a lead character.

The plot of the film follows a man who is let go from his job as a manager at a big box store. As he tries to get a new job his life spirals as his plans to start a new job collapse and his wife leaves him. At the same time we watch as his son, with a passion for tennis, gets put into a program that fast tracks him to the pros.

The film feels as if it's two or perhaps three separate films mashed together, The whole mid-life upheaval thing is barely connected to the son's story except that the characters are related and the stories collide together at the end. I'm sure that's what the filmmaker will tell you that it's all about the end, but ultimately the problem is that what happens at the end feels like a short film attached to the other two plot lines. You could chop out the first 70 minutes of this film and just watch the final 25 and you'd still get the exact same reaction to the ending.

Actually the ending would be more moving  or shocking since what happens at the end is so out of left field that it makes no sense. What happens is out of left field because after over an hour of screen time the kid never seems to be capable of doing what he does. Its a twist that makes little sense based upon what we've seen. Actually it makes no sense based on anything.

Actually what really works against the film besides the false ending is the fact the main character, the father, is a first class dick. Watching the film you completely understand why he was fired and why his wife leaves him. He's a self centered egotistical jerk. I hated him so much I closed my eyes just so I didn't have to see him do stupid ass things.

I don't hate this film, it's too well made for that and the final fifteen minutes are interesting, but I'm really puzzled at why this film is getting any play outside of France. My only guess is the producers have connection to the Rendez-Vous series and are using it to try and recoup some of the money lost in making this major misfire.

Email ThisBlogThis!Share to TwitterShare to FacebookShare to Pinterest
Labels: drama, france, not worth the effort, Rendezvous with French Cinema 2015