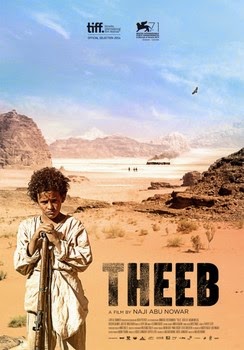 Theeb (Wolf in English) is a boy living in the desert with his older brother. When an English officer and his guide come into their camp Theeb's brother is sent along to take them to their destination. Not wanting to be left behind Theeb follows them. Forced to go along with them Theeb is soon struggling on his own as events reveal to him the dangers of the desert and war.

If you want to see a film at New Directors that will leaving you having felt as though you've seen something, and will not make you wonder why you bothered to schlep out to see it on the big screen, then see THEEB. Shot in gorgeous wide screen THEEB is a film that must be seen on the big screen. If you see this on the big screen odds are you're going to react favorable to the film.

The trouble for me was I saw this film on a small computer screen where devoid of the vast scope of the images the film has to rest on it's story- which while good- seems to drag on the small screen. While I know that any of you seeing this at New Directors New Films will be seeing this on the big screen I suspect that more of you seeing this away from the festival circuit will see this on your TVs or computers, which is why I'm explaining that my feelings were definitely affected by how I saw this.

Don't get me wrong this is a good film. Yes it's a tad arty with lots of silences and sense that it's trying to be more than a good adventure tale, but at the same time it is compelling even on the less than optimal small screen.

For more information and tickets go here.
Posted by Steve Kopian at March 18, 2015