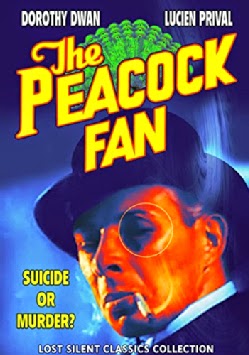 Familiar and off beat mix in the Peacock Fan a murder mystery about a rich man who dies not long after getting the title item. As the police seem stumped a friend of the dead man who was to explain the fan’s cursed history takes control of the investigation.

Your typical murder mystery among the rich story is enlivened by one hell of a detective. A refined European aire hangs about Lucien Prival as Dr Dorfman who swings into action to find a killer. The choice of detective adds 57 bonus points to what is a largely run of the mill story. I mean when was the last time you saw a detective with a monocle and such a refined attitude? Never.

When trying to find out about the film I was reading a comment on IMDB that suggested that the film may have been filmed as sound film that was released as a silent, either just as a silent (how I saw it)or in both versions. Considering the amount of talking in the film and the long titles I’m willing to believe that’s a possibility. When you see the film you’ll understand what I’m saying.

If the film has any real flaw, it’s the brief opening prolog that explains an earlier tragic event in the history of the fan. The sequence is wonderful, except that it’s a bit too much foreshadowing concerning later events. Its not fatal, but it would have kept thins more mysterious had it not been there.

Definitely worth tracking down, especially if you’re a fan of mysteries.
Posted by Steve Kopian at March 28, 2015