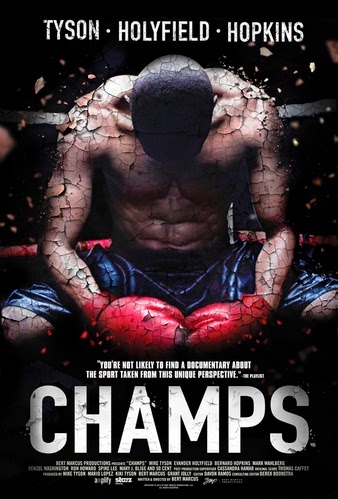 I saw CHAMPS at Tribeca last year. It was part of a year where they ran a couple boxing documentaries (The other was MARAVILLA about Sergio Martinez) and a fiction film GLASS CHIN where boxing was a major plot point. CHAMPS was the best of the three and it was the only one I'm still thinking about almost a year later.

There were a couple of posts concerning CHAMPS at Tribeca, One linked to pictures from the Q&A, one was a brief report of everything I saw the day the film and lastly there was a large review of all three boxing films. What is below is the CHAMPS portion of the review.

In trying to put this piece together I looked back over my notes and realized that this is a film that has way too much going on. Between the film itself and the Q&A (which was recorded) there was simply too much material to try and get into a review a year later. the best thing I can say is that if you love boxing or have an any interest in the sport or its trials and tribulations you must see this film. Personally I'm planning on seeing this next weekend with my dad because he missed the Tribeca screening and I know he'd love it. I'm also looking forward to the eventual home video release since I'm hoping it has the Q&A and other goodies included.

DO yourself a favor and go see this super film when it hits theaters and VOD on Friday.


Its the ability for boxing to lift people up out of poverty and dire circumstances that CHAMPS is all about. Following the life and careers of Mike Tyson, Evander Holyfield and Bernard Hopkins CHAMPS is a warts and all look at how poverty can be over come and how bad men can be redeemed through the discipline of boxing.

And when I say warts and all I do mean it.The film deals with all the aspects of the sport both good and bad. The need to cram it all in is the film's flaw since it has way too much going on for an 80 odd minute movie. In all seriousness this film needs another hour just to deal with issues like head trauma, cherry picked fights and post career problems. The film wants to tell us everything and it kind of does, but there is so much more to tell. So much in fact that I wanted to stop the film and take a breather.

After the screening I attended there was a talk with Tyson, Holyfield, promoter Lou DiBella  and director Bert Marcus. The discussion covered a great many subjects but always came back to some of the darker issues facing fighters. Why is no one watching out for them? (There is no pension) Why are the organizations manipulating who fights? (Holyfield probably shouldn't have had some of his fights) Why aren't they told to get accountants and lawyers they trust? Why do they have managers who largely do nothing these days except collect money? Why isn't there oversight?

There were lots of heavy questions, but sadly not a lot of answers. The one time sport of kings is too busy raping it's fighters in order to make money. Most promoters don't care, nor do the boxing organizations who only want to manipulate things to their ends. There was a sadness to the film and the talk because it's clear that so much needs to be fixed.
Posted by Steve Kopian at March 09, 2015