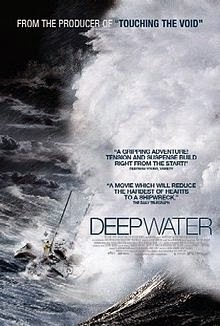 The story of Donald Crowhurst who in 1968 joined an around the world solo sailing race. The race and it's 5000 pound prize was viewed as a means of getting his family out of financial trouble. The trouble was that in making the the deal to run the race he had to make a deal with the devil which forced him to make some tragic choices

The Sunday Times  Golden Globe Race intended to take the place of the speed challenge run by Sir Francis Chichester who had sailed around the world with a stop over in Sydney in record time. Chichester had been hailed as a hero and earned his knighthood. For many people the next step would be an around the world run with no stops. The Sunday Times Golden Globe Race was the result.

DEEP WATER tells the story of Donald Crowhurst, a struggling navigational aid salesman who worked out how it would be possible for him to join the race and possibly win it in record time. The trouble was he had no money so had to find a money man to pay for the race. Crowhurst found him in a rich business man who made a devil's bargain with him that if Crowhurst turned back before a certain point he'd have to pay back all of the money...however when things began go wrong in outfitting the boat Crowhurst began to fear for his families financial security.

The film is an excellent recounting of the tragedy. A true heart breaker from the get go, its film that will suck you and and reduce you to tears, even when you know how it's going to go. The strength of the film is that ultimately the film makes Crowhurst a kind of hero who did what he did for the safety of his family. He is not a demon or villain but a guy who got in over his head and couldn't admit it until it was too late.

This is a film you should track down. I remember when this film came out in theaters where it got a bit of coverage- however once the film left theaters it kind of disappeared. I had to struggle to remember the title and it was only after stumbling on the DVD in a used bin did I remember it. Frankly its too good to be forgotten.

See this film. yea I know its very melancholy but it's still worth your time.
Posted by Steve Kopian at March 13, 2015