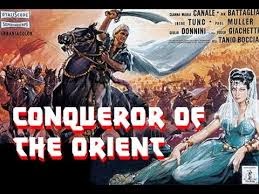 I have no idea what this looks like in its full widescreen uncut version but in the current full screen heavily edited version is a hoot and a half.

The Conqueror of the Orient is the story of a fisherman who dreams of returning to the city where his family was usurped by a false ruler. Its a film that hit every cliche of a story like this with wild abandon. There is nothing here you haven't seen before a thousand or two thousand times before. That doesn't mean it isn't fun, especially if you're in the mood to make comments when it plays out.

The film is also of interest to those of us who are old enough to remember a life before 1000 cable stations and when the Late Late Show meant cheesy movies. This is exactly the sort of film that used to run at 2am with regularity I miss those days so getting to see something as oddly dubbed as this brings back childhood memories if sneaking down to the livingroom at night to watch some wonky film.

The film was made by Tanio Boccia working as Amerigo Anton.Boccia made a living in the 50's and 60's cranking out serviceable epics such as this, numerous Hercules like films and even The Revenge of Ivanhoe which I reviewed a couple of months back.

Available in various discount DVD forms as well as on line at You Tube and Amazon Prime I recommend this film if you enjoy mindless silliness.
Posted by Steve Kopian at March 07, 2015