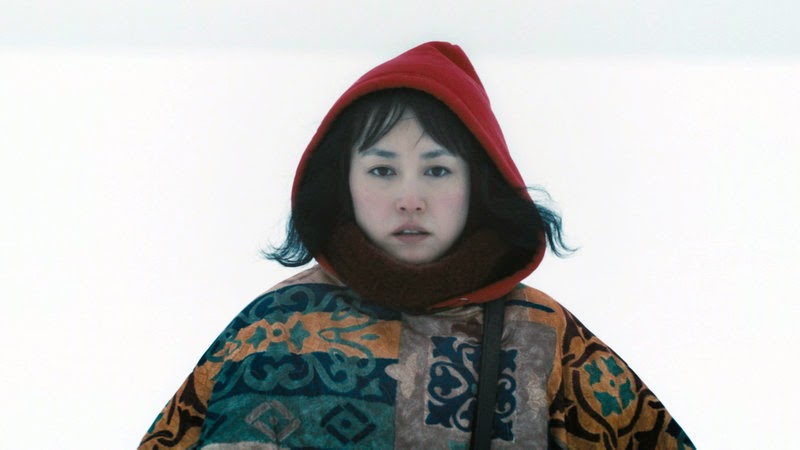 Kumiko is a young woman who thinks she's discovered the secret hiding place of the money buried by Steve Buscemi in FARGO. The trouble is she's living a miserable existence in Tokyo and the money is in the American Midwest.

Inspired by a the true story of a Japanese woman who went to Minnesota in order to get the hidden loot mentioned in the Cohen Brothers film KUMIKO THE TREASURE HUNTER came together because news reports of the actual incident were so lacking in details or conclusions the Zellner Brothers decided to complete the tale themselves- they had to know what happened even if they had to make up the story themselves.

A sad edge of your seat tale you kind of understand how the put upon Kumiko could think the film was real. I don't think it's a real mental defect so much as a woman who is so put upon that the only way to escape her horrible existence is to dream. Let's face her life sucks - her mother is a shrew, her boss a jerk and society wants her behave a certain way-why isn't she married?

That the film works and is so compelling is testament not only to the directors, the Zellner Brothers who have crafted a wonderful tale, shot it in hypnotic images and added a driving score but also to Oscar nominee Rinko Kikuchi who not only stars as Kumiko but also produced the film. I had heard before going in that some people felt that Kikuchi was a lock for an Oscar nomination and had the film been released last year she might have given Julianne Moore a run for her money. I would have to agree with that assessment since its such a finally modulated performance that it doesn't seem to be acting. This is Kumiko and if you watch her really closely you'll see all the doubt and uncertainty just under the surface. Watch the film very closely and watch how Kikiuchi bounces from certainty about the treasure to doubt and back-really watch it and you'll find the performance suddenly snaps into a depth that is greatly unexpected. It took me a bit to see it all playing in her eyes but once I did I was blown away.

As for Bunzo, Kumiko's pet bunny, his penultimate scene broke my heart. Its a killer performance that left me tearing up (no seriously it did)

This is one kick ass film. I absolutely love it, To be honest the hype I had heard set the bar rather high but expectations were met. Additionally the film drove away any reservations I had about the plot- pulling me along on the quest for treasure.

This really is a must see when it finally hits US theaters on the 18th.
Posted by Steve Kopian at March 14, 2015