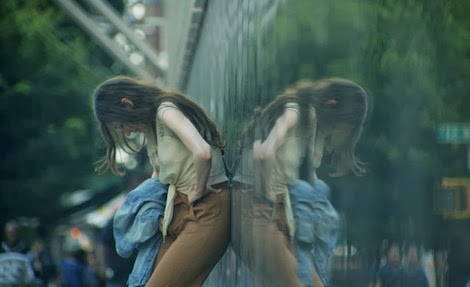 SHE'S LOST CONTROL was one of the high spots of last years New Directors New Films.  While I was mixed on the film as a whole the one thing that stick with me was Brooke Bloom's performance. Its one of those performances that makes you sit up and go "Hello- who is this person and why have I never seen them before". Its a performance that is so good that when I got press material saying that the film was coming out I instantly emailed back and said I'll be rerunning my NDNF review.

Yes I know my feelings for the film are mixed but the performance hung with me for a year- its one of those performances that you know Oscar will never recognize and is proof that the awards don't really pick the best of the year (Hell I remember Bloom from a year ago but I barely remember Julianne Moore from two months ago.) If you want to see a performance of someone who could be the next acting goddess go see SHE'S LOST CONTROL

It's all about Brooke Bloom who plays Ronah, a sex surrogate working and living in New York. Bloom who is on screen the whole time gives a really good performance as young woman navigating through her life and becoming undone by one of her patients who is both a puzzle and asks pointed questions that make her rethink everything.

How you react to the film is going to depend on how you feel about the pace of the film which is very slow. We are in Ronah's head space and we see things through her eyes and her perceptions. We watch as she interacts with her clients, her boss, the people in her building and her brother. Things meander along until things begin to really (kind of) come apart in the last third or so.

I'm going to be completely honest and say some where around the 45 minute mark I stopped caring. I loved Brooke Bloom's performance but I wasn't getting anything out of the film as a whole. The film is largely a chamber portrait of a young woman in NYC but the drama of a lot of it seems artificial, espically as it goes on. Her client John who begins to spiral her seems out of place with everyone else in the film and on a certain level the pair should have met in another film. Additionally the whole thing about the leaking pipes goes from a nice piece of NYC life to something amped up to just help turn the screws late in the game. I would have loved to have seen the film just go to the end as a slice of life without all the drama.

Probably the best way to describe it is to say despite having a great performance from Brooke Bloom that hopefully can act as a calling card, after a certain point I got bored and wanted to stop watching. Actually I tuned out and started to write about other things in my notebook.

If you want to see a great performance or like Inde chamber pieces that are forcibly about something give it ago otherwise stay away.

(And apropos of nothing- for some reason the film had me very aware that it meets the Bechdel test)
Posted by Steve Kopian at March 16, 2015