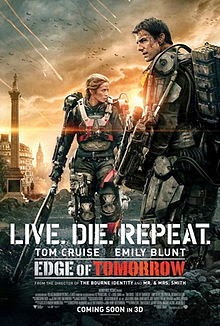 Catching up with Edge of Tomorrow on cable I’m truly at a loss to explain why the film didn’t find an audience in theaters. The best reviewed of Tom Cruises recent films it got glowing reviews and was largely ignored at the box office.

What the hell happened? I have no idea but it’s out on home video and on cable where I have no doubt the film will find an audience.

The film tells the story of Cruise’s Major Cage. A PR whizz he’s ordered to join combat troops making a grand assault on the aliens invading earth. He balks, is branded a traitor and forcibly thrown into the battle- where he dies-but not before taking in some of the alien blood. Since the aliens can reset time Cruise is given the ability to reset time himself and relive the day over and over again in the hope of finding a way to defeat the enemy.

Action packed and extremely well written this film sucks you in and pulls you along. It’s just a great popcorn film.

What I like about the film is that it makes you feel like you’ve gone all the permutations of events without going through all the permutations. We know with each action that many variations have happened thanks to a line or gesture. Its brilliantly handled and should serve as a blueprint as to how to do this sort of thing right.

If I have anything bad to say about the film it would be a minor quibble about the ending. Personally I would have ended it a tad earlier than it does- though I can’t say what point that is since it would give everything away.

This is a must see- it’s big budget film that fits the Unseen Films mandate perfectly- it’s a truly great science fiction actioner that got completely ignored when it was released.
Posted by Steve Kopian at March 01, 2015