The Man From Reno opens Friday 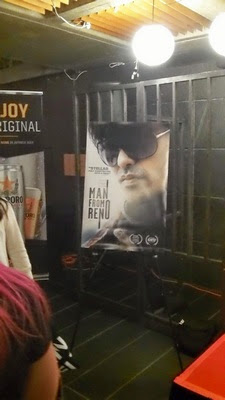 The Man From Reno opens this Friday in theaters and its one hell of a film. A twisty turny film it holds your attention tighter than most mainstream movies you’re going to run across. The plot has a Japanese author going to San Francisco on a book tour and to meet friends when she meets a handsome young man. Where it goes is the film.

I saw the film back in July when it played at Japan Cuts. I loved the film a great deal but had some problems with the plot which as some intentionally added bumps. Now almost a year later I can’t remember my reservations but I remember the film. Below you’ll find my review from Japan Cuts.

Dave Boyle's riff on neo noir concerns a mystery writer from Japan who unexpectedly leaves her book tour to fly to San Francisco nominally to see friends, but it soon becomes clear she's considering checking out permanently. Her life gets thrown a curve ball when she meets a Japanese man with whom she spends a passionate night. He's gone in the morning leaving her in a tizzy and in a bit of trouble. At the same time we follow the story of a small town sheriff who runs over a man in the fog and ends up on a course that will connect with our heroine.

A mostly solid little mystery and a very good film, has me scratching my head with all of the laurels it's collecting. Its a good little thriller that has some nice twists on what you expect from a mystery such as this but it's not that great. I had that feeling even before one thing that happens that makes no logical sense except in the director and writers mind. This is also one of those movies that goes on three steps too long since the story is effectively over at a certain point.

I would love to explain what I meant but I don't want to ruin the film when you see it- and you will want to see it.

The Q&A was interesting with director Boyle talking about how he put the film together and how he used Kickstarter. I do have to applaud the woman who asked about the point that bothered me and he said that he did it that way because he wanted to. He knew it didn't make sense in the real world but he did it anyway. I suspect from the way he answered the question the point bothered a lot of other people since the answer seemed well rehearsed. (And no it doesn't make sense I explained why to some people between the films and they agreed it really doesn't make sense at all in an otherwise realistic film)

Yes the point really annoys the hell out of me. And no it doesn't ruin the film for me since it's effectively over before it.
Posted by Steve Kopian at March 24, 2015