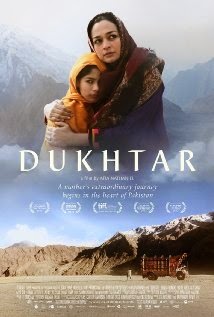 This Saturday at the Museum of the Moving Image DUKHTAR is running as part of the Queens World Film Festival. I had seen the film as part of the South Asian International Film Festival last November and it ended up on my best of 2014 list. The film is the rarest of the rare a social drama about child brides that is also a tense action thriller. That may sound impossible but trust me it works.

Here is my review of the film from November:

Pakistan's entry for the Oscars is a treat for anyone getting it to see it at The South Asian International Film Festival this evening. I've seen a good number of the Oscar hopefuls and this is only the second one that deserves to be considered for the award. Its one of the rarest of the rare a touching drama that is also a kick ass thriller. This may very well be the best film at SAIFF and it may very well end up on my best of 2014 list as well.

The film is set in motion when a father makes a deal to seal peace with another tribe by giving the hand of his daughter in marriage to another tribal leader. This doesn't sit well with the girl's mother who was given in marriage when she was fifteen, especially since the groom is many decades older. Grabbing her daughter on her wedding day she bolts out of the village in a desperate run for her family o the other side of the country. Things take a possible hopeful turn when they fall in with a truck driver named Sohail which means God Protects.

Working on several levels the mixing of drama and action films allows the film to do several things that shouldn't work. First it heightens the the tension and the sense of drama in ways that shouldn't work. The sense of good and bad and right and wrong are made very black and white even though we can see the grays. We know who's good and bad but we also see the levels of emotion and thoughts with in them.

The mixing also allows corners to be cut. We can jump to conclusions and not mind because what under normal circumstances could have been a talky film about child marriage and the rights of women are now in a chase frame work where we don't need long explanations and short hand notes are completely fine with the audience. The who's and the whats can be reduced to bullet points because there is no time for long winded discussion.

Helping everything is gorgeous visual style and driving score that makes everything move like the wind and fear for our heroines.

This is a great great film...

....and its so good looking you'll want to see this on the BIG screen when it plays tonight.

The website for the Festival can be found here
The Museum of the Moving Image page for the film is here.
Posted by Steve Kopian at March 17, 2015