GROWING UP AND OTHER LIES has me deeply torn. An examination of the point in life when you have to stop being a kid and mature (I’ll not say grow up because for me that means you stop having fun and fully give into the dull grind), the film gets so much right and then bobbles it with a structure that forces the issues to come out like a weak TV movie. 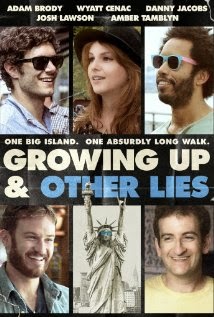 The film begins with the gathering of four friends at the northern most point in Manhattan. The plan is to walk the island from top to bottom as one last gasp get together before Jake heads home to Ohio to help out his dad and his business. Along the way the group is forced to confront their relationship, their lives and life.

Well-acted and nicely shot on locations across the Island the films look at life and the moment when we are forced to step up and be mature or at least reasonably responsible is well done. The film has a great deal to say and when you strip away the crap that surrounds some of the ideas you’ll see that there is a brain and heart lurking beneath the childish exterior.

The problem with the film is that its frequently trying too hard. The idea of a trip across Manhattan isn’t bad in and of itself but the fact that the journey is littered with every sort of obstacle or turning point you can think of is. We didn’t need to stop in and see all of the people we do, writers and directors Darren Grodsky and Danny Jacobs could have sparked the discussions without the need to bring in people and events to act as triggers. The film also tries a little too hard to have the guys be man/boys. Some of their exploits are the sort of things I’d expect from guys ten or fifteen years younger than their seeming early to mid-thirties ages. The result is a film that is better than it has a right to be and not as good as it should be.

This is a film that had me wishing it was as all as good as its best parts and cursing its worst. It’s not a bad film, but it should be better. It’s a film that has some wonderful exchanges and some wonderful performances that almost manage to lift this film out of the pack of twenty/thity somethings staring life in the face. While it is at the top or front of the pack it still is too connected to the pack to be anything you’ll remember. Its something you will enjoy- but I doubt you’ll remember it at years end.

Ultimately worth a look- but I’d go the VOD route over the 14 dollar a head movie theater route
Posted by Steve Kopian at March 19, 2015