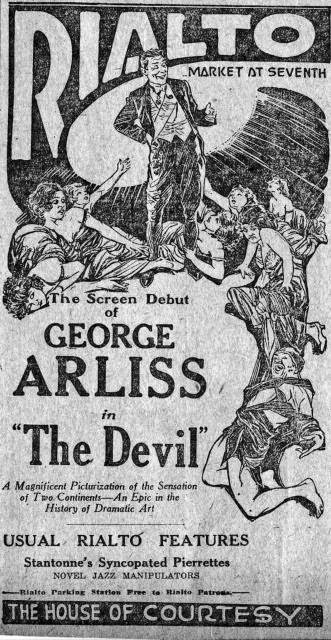 George Arliss makes his film debut playing the title character in a film that is a kind of riff on Dangerous Liaisons.

Arliss plays Dr Muller a rich aristocrat who gets his jollies wrecking relationships and reputations. Getting his hooks into an artist and his lady love he runs roughshod over them breaking their faith in each other and god.

That last comment and the title make for one of wilder endings I’ve seen in a film, and making the film much less an allegory than you might think. Actually it removes any notion of it being an allegory- which really isn’t that surprising considering the mischief that Arliss gets up to.

The film is a solid little melodrama, supernatural ending aside. The cast sells the soap with great aplomb and in my case they sucked me into the story with such fervor that I actually sat and watched it all the way to the end without zipping through on scan (a fate suffered by less compelling silent films)

Definitely worth a look see, especially if you only know Arliss from some of his physically stiff performances from the sound era.
Posted by Steve Kopian at March 27, 2015