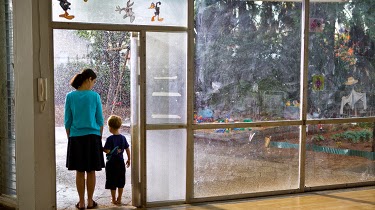 Let's cut to the chase- if you want to know if you're going to like Natav Lupid's KINDERGARTEN TEACHER you have to answer the following two questions:

If you did then you have a shot at liking his current film even if it is less naturalistic.

On the other hand if you hated that film stay far away from this one.

2. If you haven't seen POLICEMAN you have to ask yourself if you like mannered and extremely deliberate films which in some ways is made to alienate the hell out of you?

If you like mannered films give it a shot.

If not stay far away from it.

The premise of the film is that a kindergarten teacher discovers one of her five year olds has a knack for poetry. She takes it upon herself to try and protect this gift and causes all sorts of problems as a result.

Mannered and deliberately staged, the film feels like an affected play where everyone behaves in a certain way for a deeper meaning. Everyone seems interested in something else,even the camera which feels as if it wants to be doing something else.

I wanted to be doing something else as the pretentious BS flowed freely and deeply almost from the start. The film seems desperate to be about something and shake you into believing that it is about that something- though what it is is incredibly simplistic.

For the film to work you have to buy the idea that this five year old is genius or at least can put words and ideas together in ways that are years beyond his age. You also have to accept that the kid is as distracted as everyone else. While most of the adults manage to pull it off the tyke pretending  to wordy comes off as a horrible performance.

I wanted to scream.

What a load of crap.

For my money this is the last film by Natav Lupid I will ever suffer through. His POLICEMAN was the first time I ever walked out of a NYFF press screening when after an hour I realized nothing had happened. Billed as a class between police and anarchists teens the teens don't show up until the final minutes and the film ends when the clash starts. Mostly its a cop hanging out with his pregnant wife.

KINDERGARTEN TEACHER is marginally better if only in that it has a narrative thrust. On the other hand no one behaves like human beings and the whole thing struggles to be a grand look at me! look at me! I'm deep and meaning full! attempt at getting attention. Its a pretentious head scratcher that makes me wonder if Lupid knows how to end a story without having a police raid.

Then again I'd rather chew aluminum foil and shave my head with a cheese grater than see another one of his films.

If you liked POLICEMAN or are into cinematic masochism more info and tickets can be had by going here.
Posted by Steve Kopian at March 17, 2015