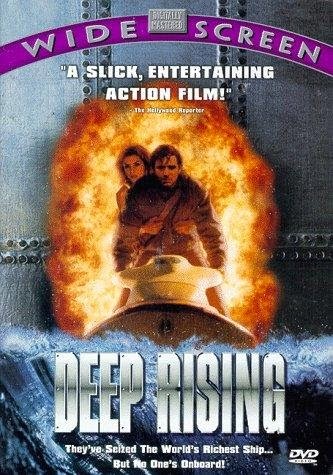 Treat Williams plays a salvage boat operator who, along with his crew end up on a stranded luxury ocean liner in the middle of a storm just as sea monsters attack.

No the film makes no sense

Actually the film is a series of escalating set pieces where the stakes get bigger and bigger. Each segment ends with a declaration of disbelief and the feeling that things couldn’t get any worse… and then it does. And since this is purely fantastical film there is no limit as to how crazy things can get-really there is no end to the insanity.

How you react to the insanity and the escalating nature of it will determine how you react to the film. I was like come on, the first time or three and then I clicked with the vibe and it’s wink wink nudge nudge nature and said “so this is what the deal is” and that’s when I fell in love with the film. How could you not?

Well I suppose you could not , but to ne honest most people I know who’ve seen it have loved it. This is a quietly culty film that no one talks about. It’s one of those that is met with “ you love that too?” whenever its brought up.

First the effects are first rate. Nothing looks cheesy, they spent money and it shows.

Second the script is spot on perfect. I knows what it is and goes with it. It works expertly within its confines and then makes them feel roomy beyond what you’d expect.

Lastly the cast which includes Wes Studi, Anthony Heald, Famke Janssen, Djimon Hounsou and Jason Flemyng in addition to Williams is first rate. Everyone sells what they are doing so you believe the nonsense because they do.

I remember when the film came out that the reviews, what reviews there were, were very good. The film surprised most people who didn’t expect much from the film and were expecting a train wreck based on the trailer.

I love this film a great deal. It’s a blast and a half.

If you want a grand over the top adventure that’s perfect for a night on the couch give Deep Rising a shot
Posted by Steve Kopian at March 15, 2015