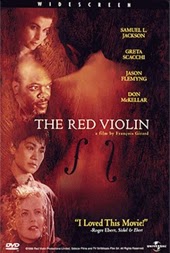 The Red Violin is the history of a certain violin, supposedly stained with blood, hence the name, from its creation to its landing in an auction house where Samuel L Jackson is looking into its authenticity. The film’s commencing story is the Jackson one and it’s the part of the story that I remember. The other stories are tell the history of the supposedly cursed instrument and the lives it effected.

A solid if unremarkable movie this is one of those good little films that you see, you enjoy and then kind of gets lost in your memory. You remember that you saw it and that you liked it every time it comes into view. For me it was one of those films that I kept stopping to watch every time it was on cable TV. For a while I saw it every couple of weeks but that faded as the influx of other staples and bigger films took its place.

To be honest it’s not a great film, it’s not one that you’re probably going to go out of your way to see, but it is one that you’ll really enjoy if you come across it. You’ll probably watch it once and then have it fade from memory.

I know you’re probably asking if it’s not the great and wonderful film why write the film up? Simple, Unseen was started to point out films you might not have heard of or might not try without a push. The original intent of the site was to show you films that are off the board but worth bringing into a cinematic discussion. The Red Violin is one of those films that needs to be seen and not forgotten.
Posted by Steve Kopian at March 09, 2015