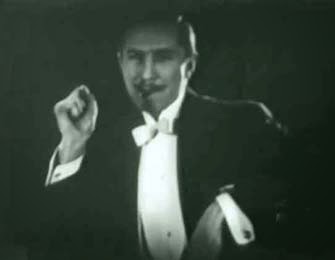 Silent pot boiler had Bela Lugosi as a patron of the arts who ends up getting into a battle with his son over the same woman.

While okay as pot boilers to go the film is primarily of interest for fans of Bela Lugosi.  If you've only seen Lugosi in his horror films  and later sound films THE MIDNIGHT GIRL will come as a revelation. Lugosi really could act. Not only could he act, he could smile and emote and move without the stiffness that he some time had.  He's so good you kind of wonder why he never really clicked before Dracula.

Helping matters is the films fantastic set design. The film set in high society and in and around the New York Opera House looks good. This is the make believe world of the rich and famous and it all feels real, or as real as movies of this sort can be.

Is this a great film?

No. Actually it's just marginally a good one. Its pure potboiler of the sort they don't do any more for good reason, its painfully contrived. Sure films like this morphed into soap operas but here things are just too sudsy.

Is the film worth seeing. If you're a fan of Lugosi it is. There is something about seeing him before Dracula and several years younger that makes his story even more interesting, if not more tragic.
Posted by Steve Kopian at March 24, 2015