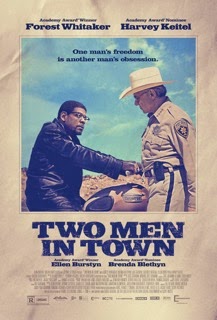 Forrest Whitaker plays a newly released prisoner. Having served his time for killing a sheriff's deputy he returns home hoping simply to get on with his life. However the long serving sheriff (Harvey Keitel) has a long a memory. As does an old associate who's in town.

Gorgeous looking film as the feel of the American South West. This is a film that lives and breathes it's location in a way that few films ever come close to.

More importantly the film is full of fantastic performances  that are light years ahead of the ones that Oscar notices. I'm not lying here, the work of people like Whitaker, Brenda Blethyn (as Whitaker's parole officer) and the rest of the cast is truly Oscar worthy. These are not the big showy roles that usually win (say what you will about say Julianne Moore's recent win or even Whitaker's Oscar winning performance they were showy roles) these are small compact lived in roles that make you forget that we are watching well know actors. These are the performances that should be heralded at year's end, but sadly won't be..

Part of the reason the film won't be remembered by Oscar is that despite being a very good film is that we've been down this road before Even allowing that this is a remake of a 1973 French film, we;ve seen any number of variations on the theme and after a while you realize that despite the kick ass performances and great look,  the film is isn't going to break any new ground. Don't get me wrong I like this film a great deal I just wish the script was as special the actors.

Currently in select theaters the film is available on various VOD platforms and is worth a look.
Posted by Steve Kopian at March 07, 2015