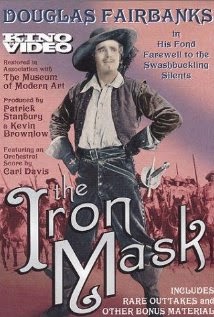 Huge suptuous retelling of the Dumas classic has  Douglas Fairbanks return to the role of D'Artagnan.  This time out the complex plot has the queen giving birth to twins.One of the prices is spirited away lest their be strife in the kingdom. D'Artagnan, after some adventureis ultimately assigned to protect the prince, but troubles arise after the prince is kidnapped and his brother is placed on the throne instead.

This huge scale spectacle may very well be my favorite Douglas Fairbanks film. To be fair that isn't hard since out side of this film, The Thief of Bagdad and The Black Pirate I'm not really a fan of any of his films. There is a lightness to most of them that takes away from the excitment. The other films feel like a goof.

Iron Mask is not a goof. Its a very serious film where there is a human toll for everything that happens. A good number of the main characters die. By the time the film ends there is very few left to take a bow.

The film looks great. Talk about crazy Hollywood spectacle this film is it Everything looks and feels real. There is an opulence to the proceedings that simply makes you go Oh Wow whether you want to or not.

The film's action is wonderfully real. These are not fights where Fairbanks takes on 57 men single handedly but fights to the death. We don't know who will live and die, and once things are in motion die they do.