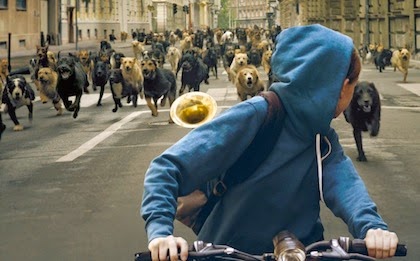 Hailed by pretty much everyone I know who's seen it as a great film I went into the press screening for New Directors New Films with very high expectations. I was ready to be bowled over.

Sadly I was not bowled over. Don't get me wrong I really like the film a great deal but I'm left to wonder about why the film has become the darling for many of my fellow writers.

The plot of the film has Lili and her dog Hagen moving in with Lili's father for three months while her mother and her new boyfriend go off to a conference in Australia. When Lili's dad refuses to pay the licensing fee for the dog its either send the dog away or to a shelter. Lili's dad simply lets the dog loose on the side of the road. We then watch as Lili tries to find her dog again and the dog goes through various trial and abuses before turning on it's abusers.

I'm at a loss as to how to explain the film. What is is about exactly? I'm not too sure. I'm not being snide here for three quarters of the film you have the parallel stories of Lili and Hagen, then it turns into a weird revenge film that borders on science fiction

In a weird way it seems to be a psuedo-remake (or riff) of RISE OF THE PLANET OF THE APES with the final turn of the dogs playing out like a canine version of the earlier film (we could call it Planet of the Puppies). It also seems at times to be a canine version of the Bourne films with Hagen being chased by animal control officers as if he were the cinematic super spy.

Its all really cool to watch and it will make you amazed at how it was done. Indeed when the film ended I asked one of the other writers what he thought and the first thing he said after he really liked it was how amazed he was at what the dogs did. If you read any review of the film everyone will wax poetic about what the dogs do being so amazing. Its so pervasive that I'm wondering if the super positive reaction to the film is really for the dogs and not the film....

...I say this because let's face it the plot of the film makes no sense.

I could go through a laundry list of problems with the film (including that the viciousness of the dogs is all cleverly staged and that if you look at angry Hagen's eyes you'll see he's just playing) but I'll only pause here to mention a few things that really bothered the hell out of me.

First and foremost why is everyone one with the exception of Lili are horrible human beings? Think about it every human is mean nasty, self centered, hateful or in the case of the object of Lili's affect a jerk (he's nice until the older girl comes around-then again he give Lili his drugs to hold and she gets busted). There isn't a likable human in the film. Worse everyone seems to have an aversion to dogs. What are they aliens?

The other huge problem is that the film puts in twists and turns that exist simply to allow the film go forward. Things like the city having an army of animal control officers always running around emass are completely ludicrous. Then there is that weird moment where the dogs bust in on the concert for no reason other than to alert Lili that the canine army is on the march,

Things are so messed up that I was going along as if it was a low budget direct to home video action film that makes no real sense but keeps you interest. this is the sort of film that the boys at Riff Trax would have a field day with because there are so many plot holes.

As I frequently say at times like this I don't hate the film, I quite like it since for all it's flaws it is compelling. Hell I'm probably the only person who found the end of the film terribly sad since if you follow the ending to it's logical conclusion a half an hour after the end all of the dogs are going to be rounded up or killed by the authorities. (try not to unsee that)

The film plays at New Directors New Films (for tickets and information go here) and opens in theaters on the 27th. 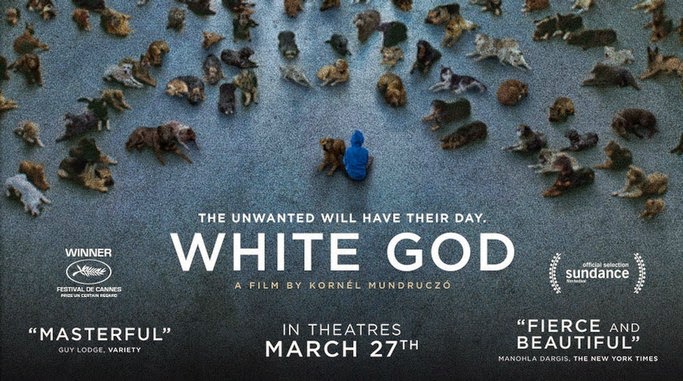