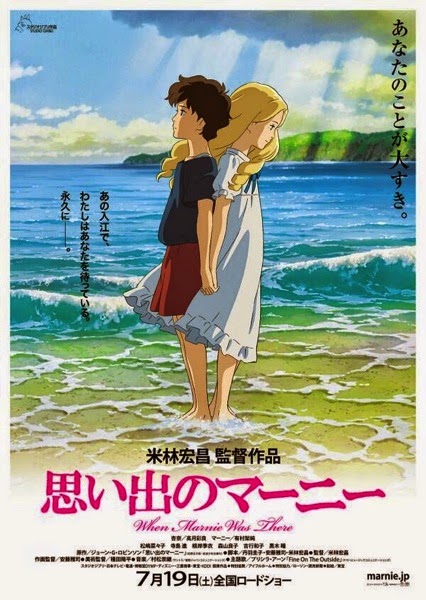 The last Studio Ghibli film for a couple of years (they have no film in production and according to Eric Beckman of GKids Ghibli’s American distributor, they are taking a hiatus but will be back in production soon) WHEN MARNIE AS THERE is a film that moved many in the audience Friday night screening to audible sobs. It’s a very good little film that gets belter once you get to it’s end and can look back at exactly what it had been doing for its two hour run time.

The film is the story of Anna a twelve year old girl with asthma. She feels out of place, partly because she is at the age many kids feel out of sorts and partly because she’s the adopted daughter of a couple who are having trouble making ends meet. When she has a particularly bad asthma attack the doctor suggests she get out of the city and is sent to stay with her “aunt” and “uncle” in the country for the summer. While there she becomes haunted by a seemingly abandoned mansion across the bay. Its abandoned but it also seems to be the home to a beautiful young girl about her age named Marnie. I’ll leave what happens for you to find out.

A charming, and dare I say moving film this is a story that is going to resonate more with young women then it is with men and boys. There is something about its themes of family and friends forever that moved many of the young women around me. When I offered a tissue to one of the young ladies next to me and asked if she was okay she mumbled something but being okay and I wouldn’t understand I was a guy. That isn’t to say that guys won’t be moved, I and several other guys started to tear up with one of the film’s final shots.

Thinking about the film and it’s twists and turns I’m finding myself hard pressed as to what to say about the film. It’s not that there is nothing to discuss, rather it’s that my desire to talk about some of the themes and twists would give a great deal away before most of you see it. The film has only played once in North America so only those of us at the New York International Children’s Film festival have seen it. And while I know it has played elsewhere around the world I still think most people have not had a chance to see it. The reasoning behind this is not frivolity on my part it’s that Anna’s journey through the story is such that the story flips and flops several times over the course of the film and knowing some things about the ending will alter what you think early on (I will say flat out that it is not a proto-lesbian tale even though for a chunk of the film it feels like it might be going that way)

If I can find any flaw, I would have to agree with Joe Bendel who said as we were leaving the NYICFF screening that perhaps the first section was a bit too leisurely paced.

While not the top of the Ghibli pile, I would have to say its near the top. This is definitely one to keep an eye out for when GKids has this hit theaters later this year.
Posted by Steve Kopian at March 05, 2015