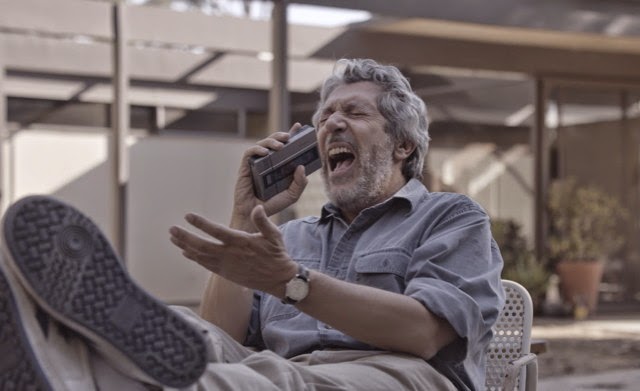 Wild WTF film from Quentin Dupieux  the director of RUBBER concerns several interconnected over lapping story lines where characters dream, imagine and watch on TV each other.

This is an impossible to explain film that will drive many of the audience from the theater. Seeing this at the Rendez-Vous press screening I watched several people head for the exits as things just got too loopy. If you can't get on the films wavelength you'll up and walk. On the other hand if you click with it you'll have a good time, many of those who remained were frequently seized with belly laughter at the insanity of narrative.

To be honest I could never hope to really explain whats going on or why. For me the film is an amusing exercise from director Dupieux that ultimately means nothing except to get you thinking. What is reality? the easiest answer is one of the characters, however after that your guess is as good as mine.

Will you like it? I have no idea. If you like mind game films that are obtuse then you might very well. I did because I liked the sheer nuttiness of it all.

Ultimately though I'm left with one question concerning the film which is who did this end up as the closing film of Rendez-Vous?  I ask that not because the set in Hollywood and is largely in English but because its so out there its not even remotely like any film I've ever seen at the series.

If you're curious you can go here for more details and tickets.
Posted by Steve Kopian at March 08, 2015