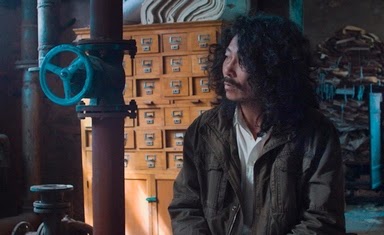 Chinese made adaption of the Franz Kafka novel The Castle reallocated to Mongolia has a land surveyor summoned to a remote village by the governor. Its quickly determined that while he was sent for it was actually as the result of a clerical error. Offered a job as a janitor instead the surveyor wants to get into the castle to talk to someone to rectify the situation but...

Well made and well done adaption of Kafka this film has a look and feel of a novel. Perhaps its a bit too much like a novel with some of the dialog coming off as too literary. Actually its so literary that I would swear that the  dialog is lifted from the Kafka novel. Still if you like Kafka or want to see a great adaption of a literary classic see this film.

I like it a  great deal and I can't wait to give it another go..

For tickets and more details go to the New Directors web page.
Posted by Steve Kopian at March 20, 2015