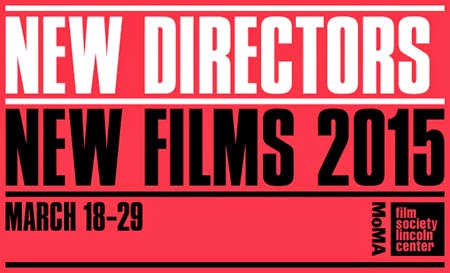 This week the annual NEW DIRECTORS NEW FILMS opens at The Museum of Modern Art and Lincoln Center, This is one of the most prestigious festivals in New York and every year it brings forth some of the most intriguing films of the year.

I've been going to the festival off and on since the festival started. It was always a film here or there until I started to cover film at which point I started to see a large portion of the films and my opinion of it changed slightly. It went from a place to where I'd see some really good films (mind you I was seeing one maybe two films a year) and changed into a look into the mind of the programmers for the series and where they were at this year.

The festival is one of the most eclectic your are likely to find. High art frequently collides with low brow. In past years we got THE RAID,  BUZZARD, THE BABADOOK mixed with MARGIN CALL. There is no theme other than we're seeing the work of newer directors with their new films. The result is that the quality of the films and even the over all festival can be very up and down.

In  2013 I saw a lot of good films. Last year, when I saw a large number of films that were screened I found most weren't that hot.(Though several writers who see everything said that's the way it is every year).

This year, by the time it's all said and done, I'll have seen about fourteen features and one of the collections of shorts, and outside of two shorts, which I despised, and one feature which didn't float my boat (FORT BUCHANAN), things were at least interesting. Even a film from a filmmaker I hate wasn't truly bad.  This wasn't last year where four features made my worst of the year list.  This year two of the shorts will probably make my Best of 2014 list, and I'm looking forward to revisiting a couple of the features. I'm not going to lie and tell you that all of the films are great but I am going to tell you that most of the films are worth seeing on the big screen. Things like THEEB, THE GREAT MAN and WHITE GOD need to be seen big. Additionally films like TIRED MOONLIGHT and LOS HONGOS have unique visions that you may want to take a look at.

For tickets and more information go to the New Directors webpage.
---
Last weekend I went with Eden to see one of the last performances of LET THE RIGHT ONE  IN at St Ann's Warehouse. She posted her thoughts here. And then added the following thoughts on Twitter:

-I was thinking about this, but Lina Leandersson and Chloë Grace Moretz are very pretty girls. And that's fine.
-Now, Rebecca Benson is a beautiful woman, but I liked that her Eli seemed to not care about being attractive at all. It wasn't a thought.
-Her Eli was basically a wild animal. There was zero vanity there. And that's why she felt different to me.
-I think it was in the movie, too, but there's a part where Eli says "I'm just Eli." Eli had forgotten about being male or female or human.
-I think the play got that more than the movie did. Eli was Eli. That was it.
-I'm still thinking about the Let the Right One In play. It created such a beautiful and tragic world. So glad I got to see it.
----
And now Randi's links
We are becoming andriods
Talking preserving film
The history of Top gear
Why the Impressionists were hated
Penis transplant
Virunga in danger

This week look for New Directors coverage plus a good many new releases.
Posted by Steve Kopian at March 15, 2015