Nightcap 3/29/15 A Woody Allen book, What I learned from interviewing Bill Corbett, and Randi's links

Life isn't sound bites. Thats how I feel about our work,its complex & the ideas we covey need a bit of explanation,need a bit of depth and passion- Julian Richings in a post interview comment

As we begin to disappear in to Tribeca-land I'm going to clean up some loose ends.
--- 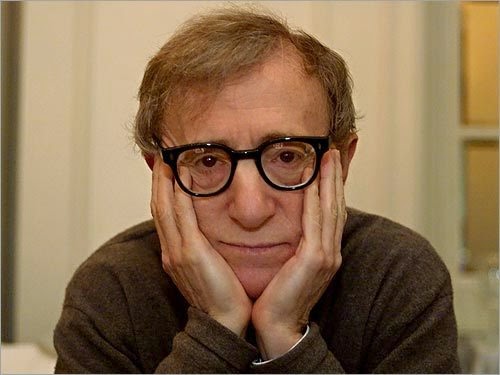 A while back I got a copy of Alex Sheremet's WOODY ALLEN; REEL TO REAL. I read it and I sent it off to Ken to review.  Ken's full review is coming soon, but I wanted to get my two sense in.

Shermet's book is one hell of an undertaking.  Not only is it a review of everything that Woody Allen has done film-wise, it's also an on going dialog with everyone who has written on Woody Allen and anyone who reads the book (Sheremet is going to update the book with online conversations and critical pieces.) To be honest I've never seen anyone ever try to do this sort of an under taking on any subject. Its kind of crazy and completely amazing.

Because I read the book for fun and not for review I can't really go into detail but I'm sure I'm not the first person to suggest that the book could be called EVERYTHING YOU WANTED TO KNOW ABOUT WOODY ALLEN, because it is. Sheremet goes into detail on everyone of Allen's films and film appearances and takes them apart. He also creates a dialog with everyone who has ever written on Allen. Old critics mingle with new critics. While I'm used to people I know and go to press screenings with ending up mentioned in the odd article, I found it very weird to see people I know mentioned every couple of chapters. Sheremet told me that it was important to include what people think of Allen now in the book as well as all through his career, so it makes sense that on-line critics fill many pages.

As a long time Woody Allen fan I'm both thrilled by the book and overwhelmed. Frankly it's just too damn much. Sheremet's review of Allen's career leaves nothing out and after a while I needed to step away. Actually I did it several times, not because it was bad but because it was like gorging myself on candies- too much good stuff.

If you're a fan of Woody Allen or want to see how exhaustive an review of a directors work can be get Sheremet's book.

Tuesday I did an interview with Bill Corbett from Riff Trax and MST3K and it made my week and Tribeca Film Festival, He was great person to talk to and at some point I’d love to talk about his time in the theater and comics and life. It was really cool (thank you again Mr Corbett)

Why do people ask the same questions when doing interviews? Because a lot of times there is limited time so the well-worn questions are the ones asked.

Additionally since the interviews tend to be about a project you can’t go too far afield. Half way into talking to Mr Corbett I suddenly realized that I had to stay on point or close to it. I couldn’t go off track because there wasn’t time.

Also when you do a short interview you can’t go too far afield lest the piece sound scattershot. Yes you can follow the through line but ou can’t suddenly turn left and get silly in a serious conversation of completely jump subjects. I had theater and comics questions ready but realized I couldn’t go there at that point. Yes we did talk about Ben Franklin and farting but that was at the end and was a semi-throw away.

In the process of doing the interview I suddenly understood how to do an interview. I have no idea why I should suddenly learn how to do it, I mean I've done a whole bunch of interviews before, but for some how I understood what makes a good interview,

Thank you Bill for that.

The interview, minus the Ben Franklin farts bit, will run in about two weeks just in time to lead our Tribeca Film Festival coverage
----
And now Randi's links

---
Over the next two weeks look for lots of recent films to be reviewed. I've been sitting on a bunch of reviews of films from the last few months and I'm going to dump them in the run up to Tribeca. Additionally look for some new releases to be reviewed. Additionally Eden has seen DIOR AND I and will be chiming in closer to the theatrical release.

You may also want to be sure to keep an eye out on our Twitter feed since Hubert and myself are hip deep in the Tribeca pre-fest screening so you never know if a stray comment may slip out about the festival
Posted by Steve Kopian at March 29, 2015