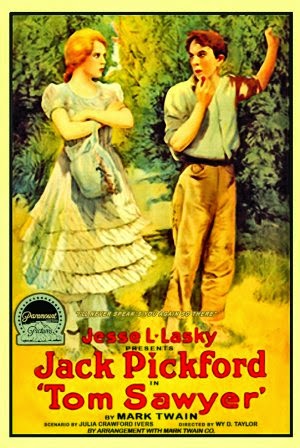 Jack Pickford is probably the best Tom Sawyer I've seen in this silent adaption of of the Mark Twain classic.

Largely focusing on Tom and his interest in  Becky, the film nicely shades Tom as more than just a bad boy. We actually get a sense of him as more than a crazy kid. The crazier one here is Huck Finn. When  tom does something like tricking the kids into painting the fence for him it's less for his being lazy and more for wanting to just get it done. WHile the first two thirds is episodic, the final third has Tom and his friends running away and being thought dead.

The film is a bit creaky with age, but at the same time Pickford's Huck, while a bit too old to be the young man of the novel, is a fine late teenage version of Twain's hero. There is a complexity to him that I've never seen in any other version. You see he thinks and has feelings. While it maybe sacrilege to some I could see this Tom Sawyer growing up and joining the League of Extraordinary Gentleman. Pickford's performance is the reason to see the film and its so good it will make you see the character in a completely new light.
Posted by Steve Kopian at March 23, 2015