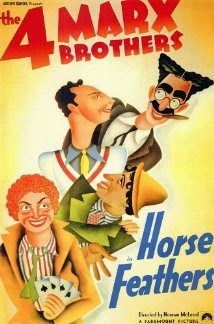 Horsefeathers is one of the Marx Brothers films that doesn’t get discussed much. One of the classic early films its over shadowed by some of their other films from the period like Duck Soup and Monkey Business. I wondered why that was until New Year’s night when TCM ran the film and I sat down and watched it for the first time in years. Having seen it I know why- it’s not up to the other films the Marxes made.

The plot of the film revolves around Groucho becoming the dean of Huxley college. His son is running around with the college widow and he has to get some ringers to help the football program.

Full of funny bits (The opening song, the football game, Chico and Harpo trying to kidnap the ringers they took the place of) the film wobbles all over the place because the plotline isn’t really there. Its more a partial pencil drawing as opposed to a sold line. While the Marxes can work without a plot (Monkey Business) the brothers are best when they are tied to tether that allows them to hang all the jokes on (Night at the Opera, Duck Soup, Animal Crakers). Here there are sketches that kind of go together, but mostly there are bits that are funny unto themselves but in the course of the film go no where- the whole college widow nonsense.

I like the film but I completely undertstand why its not really one of the films that’s discussed as being good bad or indifferent. Its none of those things its just sort of there, Yea its funny but its really just a bunch of bits. Its worth seeing as all Marx Brothers films are, but its not quite as great as others are.
Posted by Steve Kopian at March 22, 2015