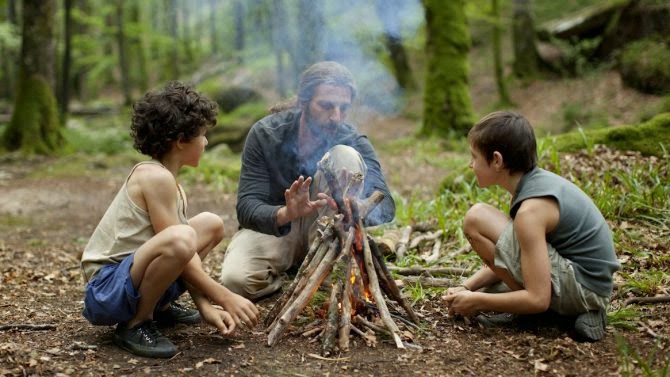 a cult with two members is a family- Paco

Fleeing the wandering nomadic life she had lead with her husband Paco and their three sons, Nora bolts to her parents house with her children hoping to live a normal life. Paco finds them and and after a court proceeding it's determined that he may see the children at certain times. During one visit he takes two of his sons (the third decides to stay with his mother) and bolts for the wilderness. What follows is a decade plus existence for the trio on the fringes of society.

I'm torn about this film.

In many ways the films insistence on not being judgmental, of not providing answers  and not going for cheap emotion is commendable (even if the emotion occasionally creeps in). Here is a film that shows us its story and lets us make up our own minds. its lovely to be trusted by a filmmaker. We're not lectured, we're not told that what Paco has done is wrong or that this alternative life style is bad, rather we simply watch and see how things play out. I like that the film doesn't seem to have all the answers and shows that once the boys  approach 18 they begin to butt heads with their father.

The trouble is that this based on a true story is not giving us the whole story. And even if this were wholly fiction it would be clear that something is missing. For me the two biggest problems is that in many ways the life on the run is a little too idyllic. Yea they are running from the police and living on the fringes of society  but the filmmakers are almost a little too in love with life on the edges. Watching the film I really couldn't see what Nora was running from other than having stuff. The other problem is that the jump in time seems to have left something out. What happened in the intervening years? We don't really need to know what happened  but to me there really isn't a sense of a life lived. Its as if we moved from then to now. The jump occurring more because we have to get to the preordained conclusion.

As I frequently say the film is far from bad, it's just it's trying to jump into the great category but ends up falling short which makes it seem less than it is.

I liked WILD LIFE, the trouble is I wanted to love it. From the thriller-esque opening where Nora flees with her kids, I thought I was going to love the film and instead I just liked it.

Is it worth seeing? Oh most definitely, just brace yourself for being disappointed that the glorious parts don't add up to a glorious whole.