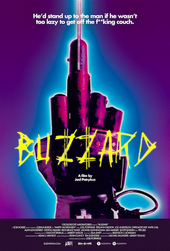 The lovely people at Oscilloscope contacted me about covering BUZZARD which comes out in theaters Friday.

"Would I be interested in covering it at Unseen Films?" they asked.

I was honest with them and told them that I had seen the film at New Directors New Films last year and that I didn't much care for it (astute readers will note it was on my worst of the year list).  However a couple of people here at Unseen were interested in seeing it so I offered to run the film by them and see what happened.

What ended up happening was I ended up seeing the film a second time.....

For those who don't know BUZZARD is the story  of Marty,a slacker horror movie loving metal head loser who gets in over his head when the scams he's running, (returning office supplies and cashing checks he has no right to) begin to back fire. Its a kind of existential comedy of errors for a not particularly nice guy.

When I originally saw the film last year I never could get past what an absolute jerk Marty is. He is an abrasive bore who, in the early part of the film, gets away with a ton of stuff that he really shouldn't. I hated that he could get away with things that in real life he could never get away with- or at least to the degree that he did here. I hated it so much that about a half an hour into the film I walked out.

I decided to give the film a second go because several peopl I know saw and loved the film and the pain that Marty experiences.

I should say that the second screening of BUZZARD  took place right after I watched Joel Potrykus earlier film APE, which also starred Joshua Burge. I mention this because seeing the films back to back was like seeing riffs on the same themes done by a director who may or may not be a one trick pony. I had the thought that if you could take the best bits of the two films you'd have a great film, instead of just two okay ones.

Watching the film a second time I discovered a couple of things- first BUZZARD is not as bad as I first thought. I still wouldn't put it anywhere near my best of the year list but I have a begrudging respect for it because there are moments where the film comes surreal alive.  The much heralded spaghetti sequence is a trip, as is the finale of the film which is actually one of the cooler moments in a film I've seen this year. There are also a couple of other moments and set pieces that lift this film up into being something intriguing (or if not the film as a whole at least reveal that Potrykus may have a future in film)

To be honest the film has problems. The biggest is that Joshua Burge's Marty is an absolute dick and it's kind of hard to watch him even when things begin turning against him. You can't really root for him since he's such a jerk he deserves everything he gets and then some.  I have never been a big fan of watching the worm turn sort of humor even if it takes the notion that most humor is watching some else get abused to an extreme degree. Here our main character is so bad you don't want to see the pain of his predicament, you want to see him die and end our misery at being with him..

As I said above not long before I saw BUZZARD a second time I watched director Potrykus earlier film APE on Amazon Prime.  I took a look at the film because the Brooklyn Academy of Music was running the the films together as a one night event. Watching that film I had the weird sensation of having seen it before (I hadn't)  and it wasn't until I saw BUZZARD that I realized that APE has many similarities in themes particularly in its set up of having a lead character who isn't really likable. It doesn't help that Joshua Burge plays both leads pretty much in the same way with the result the characters seem so similar that I had to check the character names at IMDB to see if one was a version of the other- not officially at least. To be honest APE scores over BUZZARD it's in that the character that Burge plays is slightly more likable.( Though to be honest I can't say much about APE because it's not as memorable as BUZZARD)

Is BUZZARD worth seeing?

For the adventurous film goer I'd say yes. If you're predisposed to liking off beat films and don't mind jerks as your main character I would give it a shot. As much as it may pain theater owners you may want to go the VOD route over theatrical route since most VOD is cheaper.
Posted by Steve Kopian at March 05, 2015