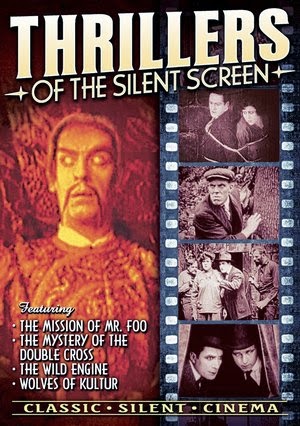 Short film has Mr Foo falling in love with the daughter of an American official and giving her a necklace which leads to his downfall.

Short and sweet espionage tale is a yellow peril about the dangers of the mixing of the races. Actually its an espionage tale about a traitor getting caught when his lust for a woman has him do something stupid, but the warning about chasing the exotic is there.

I'm giving the film more weight then it really has but at the same time it is a very clear expose on the social lines that society had at the time the film was made. One did not cross the color or ethnic lines anywhere.

The film itself is a pretty good tale. the reason I'm writing the film up is simple because its a pretty good little film. The only real problem with the film is that it only runs 12 minutes and as the clock winds down on the story races to an abrupt end. I would have liked a bit more story.

Definitely worth seeing. Its available on the above DVD from Alpha Home Video.

(As for the other films on the DVD-I'll be reviewing The Wild Engine tomorrow. Mystery of the Double Cross and  Wolves of Kultur are the 14th and 1st episodes respectively of silent serials. They are interesting but Double Cross suffers from not having the previous 13 episodes to lead into it and Kultur makes you want more)
Posted by Steve Kopian at March 11, 2015