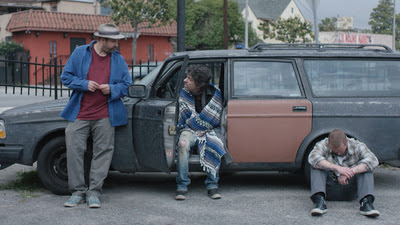 1000 Junkies is one of gems of the Tribeca Film Festival. Coming out of nowhere this seemingly bad taste film manages to be both funny as well as tought provoking. When it’s done you’ll have enjoyed yourself and been given much to think about.

The plot of the film is simple, three long time junkies head off to get their first drugs of the day. What happens is the film.

Think of this a kind of absurdist take on drug addiction. It plays as a kind of Samuel Beckett play if Waiting for Godot had been a road film about drugs. You’ll laugh at the nuttiness of it all and then hate yourself as the implications overwhelm you.

The thing is that as surreal as it gets the film always feels real. You get a sense that writers and directors  lived this or were party to some of it. You root for the guys who seem like nice guys. And at the same time you feel sad and kind of heartbroken when you realize that this fucked up existence is what these guys do every day.

After the press screening the PR person handling it asked me what I thought and I said I really liked it. However when I got home I emailed her to say that the film was great. In its way it’s a masterpiece because it manages to balance the seriousness of the situation with the insanity of it. While no one dies the horrors of addiction are always there, the pain, the illness and the broken relationships. The fact that the film manages to handle all of them so perfectly puts this in the running for ending up as one of the best films of the year.