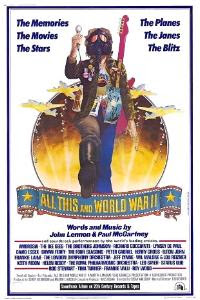 Beyond bizarre legendary flop ALL THIS AND WORLD WAR II is someone's acid dream of a good idea. Basically clips were cut together from news reels and features of the Second World War and newly recorded versions of Beatles songs were played over them.

Other than in on instance and random moments things do not really come together... with the result that the audience's jaw hangs wider and wider.

I've been wrestling with the film since it came out. 40 years ago. The film was a staple on some cable stations and I'd constantly crash into it and wonder what the hell it was. I like war films, I liked the Beatles and I liked some of the singers so I gave it a shot,,, and just wondered what they were thinking. I recently saw it again and I'm still wondering.

The film has moments. the best is the almost opening sequence where footage of Nazi processions is cut to Magical Mystery Tour is sheer genius. The rest less so, owing largely to the fact the songs don't combine with the images for the entire length of time. Golden Slumbers works for a while at Dunkirk and then collapses.

The music is interesting but all over the place. Peter Gabriel doing Strawberry Fields is interesting but fleeting, Keith Moon doing when I'm 64 works but not in the film, I'm a fan of Leo Sayer but three songs from him is odd. I found that the inclusion of Jeff Lynne solo interesting and ironic since several decades later he would be producing the Beatles. Also the Bee Gees appear two years before starring in the ill fated SGT PEPPER movie musical.  The best known song is Elton John's Lucy in The Sky With Diamonds. (For a full track list go here)

To be honest I have no idea if this is a good movie. It is a unique experience- but  beyond that I have no idea. As an experience and for the moments that work its highly recommened for adventurous film goers- all others stay away.

A rescored and recut version of this film is going to play at Hot Docs. For more information go here.
Posted by Steve Kopian at April 14, 2017