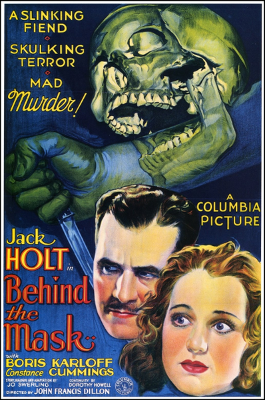 Jack Holt escapes from prison and follows the advice of his friend Boris Karloff to go see a certain man if he wants to remain free and make lots of money. Holt does so and soon finds himself working for a mysterious Mr X, who is running a large criminal operation. Holt however is no cook, he is instead a federal agent seeking to break a drug ring.

Made prior to the release of Frankenstein this is a film with Boris Karloff in one of his henchmen supporting roles. He's good but a bit over active. The real star here is Jack Holt who was a big star in the silent days and who's career slowly faded once sound came in. I've always liked Holt and felt he was under appreciated by most people who know who he was (The problem is that most people have no idea at all who he was). Holt here is a rugged leading man and a nice man of action. He is in short the perfect hero.

The film itself is quite good. Going from big house, to country house to doctors office, this is a thriller that keeps you guessing and keeps you interested. Its nice to see a movie that isn't so formulaic that you can connect the dots and know who is doing what before you're told. The action when it comes is well done and there is generally a good amount of suspense, especially in the final moments as it is uncertain if or how out hero will escape the villains clutches.

Worth searching out and perfect for a nice double or triple feature on a dark and stormy night.
Posted by Steve Kopian at April 06, 2017