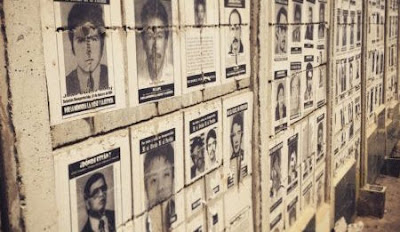 I saw FINDING OSCAR  last year at DOC NYC last year and was deeply moved. Since the film is opening Friday I'm rerunning my review from the festival

Produced by Steven Spielberg and Frank Marshall FINDING OSCAR is the story of Guatemala’s Civil War which left hundreds of thousands dead, many murdered by the government who wanted to wipe out anyone they thought might even remotely be a danger to them. The film focuses on the massacre of the village of Dos Erres which was wiped out one day in 1982 and on the story of Oscar, one of to boys who survived the massacre.

Good look at the terrible things that happened in Guatemala is a bit uneven in the presentation. The first half or so feel like a rushed TV documentary where they are trying to tell you a great deal in a short amount of time. The second half, with the aftermath of the massacre and the search for Oscar is much better. The split results in a weird feeling in that what initially seemed like a film about the wrongs done, shifts to become a very personal story. It's an odd shift that kind of inflates the film as a whole and makes it something special.

That Oscar's story is moving and by the time it comes to an end I was wiping a tear from my eye.
Posted by Steve Kopian at April 11, 2017