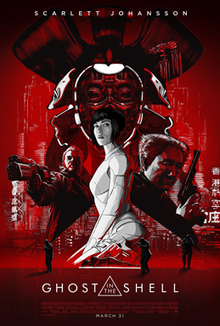 The live action adaptation of Shirow Masamune's GHOST IN THE SHELL is without a doubt a messy affair- but then what version of the story isn't? For example as ground breaking and game changing as Mamoru Oshii's first film is it is rife with burps and hiccups in the plot. The later films and even the TV series have their own issues as well. Rupert Sanders version has plot problems as well, but at the same time it manages to overcome them and become something unexpected a deeply moving film about the search for one's humanity.

I need to say I'm not going to get into the charges of white washing. The casting is all over the place and the film has some weird turns as it is, with Takeshi Kitano speaking in Japanese while the rest of the cast speaks English. For good bad or indifferent the cast is what the cast is and there is no point in arguing it now. To my mind the only thing we can do is take the film on its own terms and go from there.

The most basic version of plot has woman now known as Major having her brain saved after a terrorist attack that killed her family. Placed in cybernetic body she is given a job as an agent for Section 9. During one mission she ends up getting on a trail of a cyber hacker known as Kuze. Kuze is killing off scientists who work for the Hanka Corporation. As Major tracks Kuze questions of her own past are raised as are notions of her own humanity.

Because the earlier versions of the tale have been so influential and have in turn been influenced by the children they spawned this version of GHOST always risked the danger of becoming old hat. We have been here before but how were they going to make this film play new? Very aware of the problem the filmmakers seem at times to have given over to simply redoing in live action the key sequences in the first animated film. The iconic geisha attack that includes the Major's fall from a great height and turning invisible is the first of many sequences lifted from the earlier film seemingly shot for shot.

At some point the filmmakers break away from direct copying and instead begin to go their own way. While the plot parallels the source materials director Rupert Sanders and his writers Jamie Moss, William Wheeler and Ehren Kruger begin to take things in a different direction very subtly. To be honest the plot at a certain point seems to be spinning out by rote, but at the same time they compress some points and make other things clearer. While the action sequences are quite good, the actual story kind of seems to be an afterthought. As the plot heads in familiar direction they are quietly shading the characters. There is an intensity to the interaction of the major characters that is missing in other versions. There is life behind the eyes of the various members of the cast, How Pilou Asbæk's Batou reacts to his new set of eyes is actually quite moving. There is a sadness to it that never was in earlier versions. Juliette Binoche invests her Dr. Ouelet with a very troubled conscious that seems more connected to reality. The film works because of the human element, not the plot.

Such it is with Major. There is this point toward the end of the film where the film changes from a good one and becomes a great one. The moment is when Major tells Kuze that she is not ready to leave yet. It is here that the film drops the curtain or the pretense and stops being a cops and robbers film and reveals itself to actually be a film of a personal quest for humanity. Watching the sequence as well as everyone that flowed from it straight on to the end credits revealed the film not to be about the action but about the characters. Why did everyone talk so much? Why was the film more interested in showing how the characters interacted instead of blowing things up? Because the film didn't care about the action, it cared about the people. Every word actually reflected something more human and connected to the characters.

Watch how the sequences play out after Major's not ready to leave line- each one is set up to show that people matter more than machines and that everyone is a kind of family who are taking care of their own. "Is the Major Okay? asks one character "She will be" answers another with a genuine sense of caring for a family member. She will be not just from the danger of the moment but on a larger level because she has become human again.

When the final moments hit I found myself deeply moved.

I know that the film has taken a number of brick bats for any number of reasons but I really suspect that most of the critics who have sided against the film have gotten lost. To be certain the film is full of eye candy, the future here has eye popping advertisements across every street but had the film not been so glorious to look at (especially in IMAX 3D which blew me away) I think the film would have been equally scorned for skimping on the visuals. Visually the film was damned either way. I think the fact that the visuals are so spectacular and that action sequences are so impressive has many people losing sight of the fact that this is really just a small human story.

For all the wonder this is ultimately the story of one woman trying to find out who she is and where she belongs. Yes, along the way we are left to ponder the nature of reality and our pasts but ultimately this is about one woman and her personal quest. Some people go to India, the Major takes down a cyber terrorist.

This is not an epic story telling but actually small vest pocket one that isn't about the fate of humanity but one person lost and trying to find their way home.

Truth be told by the time the film ended I was staring at the screen pondering what I had just seen. I was wondering why it was that this live action version of the film had hit so many right notes. To me this is the first big budgeted epic in many years to hit the ending absolutely note perfect- not only perfect but something better instead. Watching the final minutes I wanted the film to do a few things and I found that not only did it do them it one upped them to the point I started to tear up.

In the end while I could take the plot of the film apart with ease I cannot argue with the emotional truth the film achieves, that is something special especially coming from an American studio in a big budget film.

If you didn't like the film see it again or if aren't sure you can see the film without thinking of the furor then see it in a year or two and forget what you know or think you know and just take the film on its own terms. If you do that I think that the film will open up for you and you will come to feel, as few of us now feel that the film is a masterpiece and (possibly) one of the best films of 2017 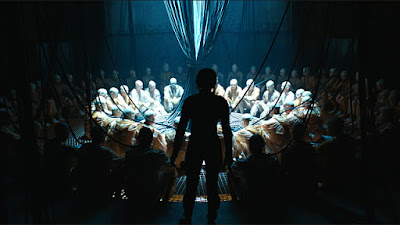