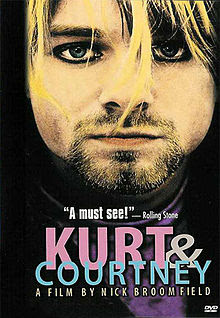 Nick Broomfield's look at the death of Kurt Cobain is a raw and real look at the grunge rocker and his life... and according to Broomfield his conniving and controling wife Courtney Love.

The grandfather of all of the "Kurt Cobain was murdered" docs- though Broomfield states he doesn't think that's the case - is a more telling portrait of Cobain's life and and wife. While it's clear from the film that things are not quite kosher with the entire story as reported the film also makes it clear that the Cobain's life wasn't as reported in the hagiographic MONTAGE OF HECK.

To be honest I'm not sure what I think of the film. One of Broomfield's more scattershot documentaries, this isn't a bad one, rather more an unfocused one as the film shifts from Cobain and his death on to Courtney Love and her efforts to stop the film from being seen. There is a raw power to it all but I don't know if it adds up to very much.

That said there is a great deal of information in this film- though some of the information seems to have changed over time for example Broomfield said that he doesn't think Cobain was murdered because according to a doctor the heroin in his system would have given him enough time to pull the trigger- a point argued against in SOAKED IN BLEACH who said that the doctor was not talking about intravenous heroin but orally ingested methadone.

If you're curious about what may or may not have happened to Kurt Cobain- this is the place to start- just remember to keep looking past this film..