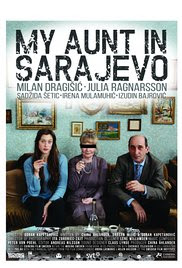 A Swedish Bosnian co-production, MY AUNT IN SARAJEVO is a deeply moving meditation about war, memory, and our children. This hour long film has more truth and emotional heft than most other films running twice as long.

The plot of the film is simple, Sweden born Anja has a lot of questions concerning her heritage. The daughter of Zlatan, who escaped from Sarajevo in 1992, she knows very little of her father’s country or even her father’s past. Wanting to know more she books a trip  to Sarajevo in order to find answers. She is happy when her dad agrees to go since she may get him to talk about the past. The key "reason" they are going is to visit an aunt to whom Zlatan has been sending money to for years. However what they find once they arrive what happens is not what either one is expecting.

At times funny and at other times deeply moving this film is as wonderful a viewing experience as I’ve had in a long time. This was a film that touched my head and my heart. This is good time with good people.

One of the things that makes this film so special is that its carefully modulated story forces us to really consider not only what we remember of the past, but what we tell future generations. Are we keeping our children safe by not telling them what happened or are we hurting them? Additionally what are we doing to ourselves? These are not easy answers because dealing with them opens us up to thoughts and feelings we may not want to deal with.

Over the course  of the film Zlatan  changes as he comes to terms with what happened three decades earlier, thanks to connecting with "lost" friends and family, including Anja who begins to understand why her dad was so reluctant to talk.  We watch as Zlatan becomes freer because he deals with the losses of the past.

For me there is a beautiful visual metaphor in the film where the lovely city of Sarajevo which seems largely rebuilt and fine for much of the film, but is suddenly seen to be chipped broken and bullet ridden. Yes, like Zlatan, it is together, but there is damage if you look closer. However at the same time life is going on. It’s a sort of obvious trick but when it how it is deployed in the film results in an audible gasp.

I loved this film a great deal. It is an important film about the cost of war and what is really important in life.

A must see when it plays at Bosnian-Herzegovinian Film Festival Thursday night. For tickets and more information go here.