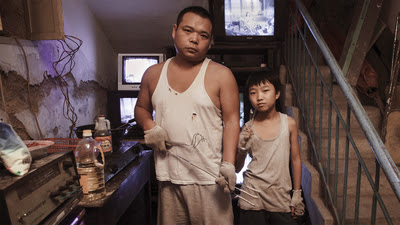 Funny, touching and possessing a glorious love of movies that is only rivaled by CINEMA PARADISO, KING OF PEKING is simply a movie lovers delight. Framed as a buddy film the film is full of references from top to bottom- not only is the dialog a running trivia game of film titles, but the film is shot in various ways that echo earlier films, (rear screen projection and riffs on other films)  while the film's score if full of themes used in other films. If you love movies you will end up tallying all the references that fill this film.

One of the best films at Tribeca and one of my favorite films of 2017. You must see this film.
Posted by Steve Kopian at April 20, 2017