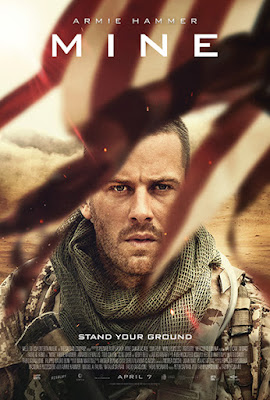 It's easy to know why Armie Hammer took the role of Mike in MINE since it allows him to give a broader range of emotions in his performance. Hammer's best reviewed performance to date was in THE SOCIAL NETWORK and despite that he has never really stood out despite being in THE LONE RANGER and MAN FROM UNCLE remakes.

The film has Hammer as US military sniper on assignment in the desert. He and his spotter are waiting for their target. When different colored car shows up (it's gray instead of black) Hammer isn't sure they have the right guy. Things spiral out from their and they end up on the run in the desert. Eluding capture the pair soon are pondering if the sign that they find in the sand warning of a mine field is real, It would seem so as the spotter is blown up and Mike thinks he's stepped on a mine himself. With sandstorm keeping the choppers grounded and the only people who can get him pinned down and 52 hours away Mike has to find a way to survive in the blazing sun.

This is a good little thriller that has it's share of tense moments. While one would think the idea of a lone guy alone in the desert wouldn't work, it largely does since Mike begins to break apart, dangers lurk and a local man wanders by.

While the film is probably a bit too long and the ending isn't perfect, there is enough here to keep one watching from start to finish.

Worth a look when the film hits theaters and VOD on Friday.