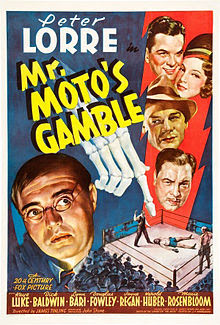 Weird crossover of the Mr Moto series and the Charlie Chan series was the result of the death of Warner Oland. Everything was pretty much set to role on a new Chan film when Oland died. With everything set to go and no ready replacement in sight the studio brought Peter Lorre who was playing another Asian detective in the Mr Moto series and simply soldiered on with Moto filling in for Chan, complete with Keye Luke as number one son Jimmy and Harold Hubert, who plays Lt Riggs.

The plot of the film has Moto teaching a course on detecting crime that’s attended by the younger Chan as well as kleptomaniac Wellington played by Maxie Rosenblum. When Riggs takes Jimmy and Moto to a boxing match they end up witnessing a murder in the ring. This sends the trio, along with Rosenblum off on a quest to find out who done it.

A good entry in either series GAMBLE is just great time with great characters. Luke had the Son routine down pat and it’s clear that things didn’t matter which detective he was playing against he simply shined. Peter Lorre’s Moto always seemed to be tougher detective then Chan. In numerous film Moto goes under cover with Lorre in heavy make-up. He also wasn’t afraid to kick ass when he had to which was something you never saw in an of the English language Charlie Chan Films (Chan is a man of action in the Spanish language ERAN TRACE). I always was of the opinion that Moto could have dropped Chan at any moment.

While this is a lighter Moto, clearly the result of the retrofitted script, as a whole the series was much meatier than the Chan films. The films are darker, the violence more disturbing. There is a weight to the proceedings which I believe were the result of the film’s globetrotting and not being set always in urban locations.

Definitely worth tracking down whenever it runs or if you can get it in one of the DVD sets.
Posted by Steve Kopian at April 08, 2017