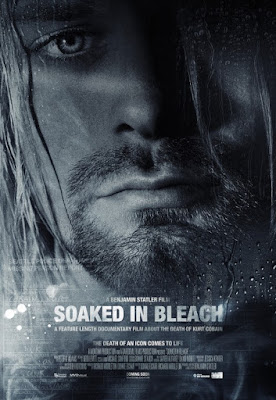 Was Kurt Cobain's death really suicide or was it murder?  Detective Tom Grant thinks it was probably murder...and he has some interesting audio recordings that raise some interesting questions

A mix of talking heads, audio recordings and reenactment this film is the story of Cobain's death as experienced by Grant. Grant was a detective who was hired by Courtney Love to find Cobain who seemed to go missing after he got out rehab. The trouble is that Love seemed to be hindering the search more than helping and in hindsight things don't add up.

At the start I should point out there are issues with the film. As with all films that don't tow the Cobain was a suicide or portray Love as anything other than a wonderful person this film has been threatened with law suits. Love is portrayed as a controlling bitch on wheels so trying to stop the film is understandable. One of the people interviewed in the film, former NYPD detective Vernon Geberth, came out to publicly chastise the film since he said that he felt the film misrepresented his feelings toward case which was that it was indeed a suicide. (actually Geberth's comments are on suicide investigations in general and not Cobain specifically). Because theaters showing the film were threatened with lawsuits the film barely got a theatrical release.

Despite all of that I really like the film a great deal. While I have not gone into deep detail to investigate all of the points  further, the fact that the film has some of Grant's audio recordings (he recorded hours of talks with lots of kep people), one of the first responders on the scene and presents some intriguing factual points (the ejected shotgun shell on the wrong side of the room) leads me to believe that the official story isn't the absolute truth. There is something about the sincerity of Grant and the weight of the other scenario presented that has me leaning toward thinking that something else happened. Was it murder? I don't know. For all I know it was Courtney simply manipulating everything but after seeing the film I can't take the party line.

Recommended for anyone who remains open to any possibility
Posted by Steve Kopian at April 13, 2017