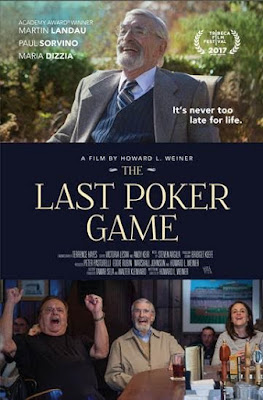 Martin Landau stars with Paul Sorvino and Maria Dizzia in a charming eyes opened look at the perils and joys of growing old.

Landau plays Dr Mandelbaum, a retired heart surgeon. When his wife's Alzheimer's advances to the point where he can't handle her on his own he moves them both into a nursing home. Things don't look all that bright, the home's director says flat out that he hates old people, but Mandelbaum's luck changes when he he meets a roguish man named Phil played by Paul Sorvino. Sorvino has lead a more than full life and isn't going anywhere without  a fight. Add to the mix a young caring nurse played by Maria Dizzia and you have a sweet little film.

Unjustly buried at  the Tribeca Film Festival THE LAST POKER GAME, is an absolute charmer. I'm guessing the films charming warm feel confused the programmers who liked it enough to schedule it but had no idea how to schedule it or how to program it. In all honesty the film remains an enigma to many in the press corps who had no idea the film was at the festival. "You're covering what film?" they asked.  When I told them they still had no idea. Honestly they missed something special

Written and directed by neurologist first time director, Dr. Howard Weiner the film is remarkable for a couple of reasons. First the film shows the sure hand of a director who has been making films for a long time.  Comparable and in many ways better than the sea of  small independent films that run across my view each year it's hard to believe that Weiner hadn't done this before. The camera set ups, the  editing and the creation of a sense of place are all first rate.

The other thing that is amazing is the script which takes a real and clear eyed view of growing old. I love the frank talk and atypical twists of the plot.  While I would not be fool hardy enough to say that Weiner has written a perfect script, there are a few moments that seem like they were a bit too melodramatic and or a tad contrived, there is enough here that is unlike any other American film. I love the waves of emotion Landau and his wife share- no other filmmaker would have been able to craft such real moments unless they were extremely talented.

I want to see what Weiner has coming up next for us.

I have to mention the cast. The whole cast is full of great people but the three leads are exceptional. Landau, Sorvino and Dizzia have turned in wonderful performances. While I have seen Sorvino and Dizzia recently, Landau seemed to have disappeared.  It's a great thing that he's resurfaced in this film. Not only does he turn in his usual high caliber he seems to have upped his game, no doubt egged on by Sorvino who seems to match him note for note.

THE LAST POKER GAME is a gem of a film and worth your time when it resurfaces now that its Tribeca screening is done.
Posted by Steve Kopian at April 24, 2017